Give Latin a Chance!

You’re looking over the language options for your school. German, Spanish, French… Latin?

“Isn’t that a dead language?” you ask yourself.  Let me be the first to tell you: studying Latin is an incredibly rewarding endeavor. It is by no means an easy road, but it will enrich your education in the long run. English and Latin are the root of all Romance languages (Romance meaning “from Rome” and not “Jack and Rose”), making it much easier to pick up other languages like Italian, French, Portuguese and Romanian!

So why consider studying Latin?

You learn so much history by reading Ancient Roman literature. Everyone should read The Aeneid at least once in their lives. You’ll realize that this epic tale laid a foundation for modern storytelling. If you go one step further and read it in its original Latin, you’ll gain an in-depth appreciation for the story.

Julius Caesar’s account of the Gallic Wars is truly amazing when you think about it; the writings of a famous historical figure survived for centuries and now you’re translating his words. You are reading about actual events. Not only are you improving your translation skills, you’re learning the history of Ancient Rome from an ancient Roman!

Roman mythology is rich and varied. Many forms of entertainment today contain traces of Roman myths and Latin language itself. “Harry Potter” is a great example. Nearly all of the spells are Latin words or phrases. This makes reading or watching it that much more fun, because you understand what they are saying:

Additionally, movies such as “Clash of the Titans,” to TV shows like “Rome,” and video games like “Gods of War” are influenced by Roman mythology and culture.

Studying Latin also improves your critical-thinking skills. Latin grammar can be challenging: You have to consciously think about it. One thing you immediately notice about Latin is that the word order isn’t, well, orderly. For example, sometimes the verb is at the end of the sentence and you have to determine where it fits. To do this, you must translate all the words in their proper tenses, then piece the sentence together like a puzzle. By the time you’ve finished the sentence, you’ve used a lot of brain power!

Still having doubts? These famous folks hold or held a Classics or Latin degree:

Latin is certainly a difficult language to study, but in the end, you’ll be happy you did!

Using the Incredible 5 Point Scale as a Tool for Communication

Characteristics of a Successful Student: Part 2

5 Tips for Parents to Encourage Studying

When Will I Need This? Lessons You Can Still Take From Dull Assignments

Why Do Homework and Learning Matter? 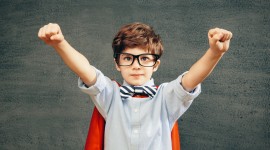